InMoov is a robot created in 2012 by a french sculptor named Gael Langevin. The cool thing about this project is that it is completely open source, printable using almost any 3D printer (like my Anet A8), and customizable with Arduino and many sensors.

Thanks to MyRobotLab, an open source software developed by many volunteers, working with Arduino, servos, cameras and other hardware is easier than write all the code from scratch.

This is my first serious work with my Anet A8, I decided to start printing the head and some part of torso: just to test the printer and my skills with Arduino.

During the building of the model I made some mistakes, learned a lot stuff and burned some components 😂: I dediced then to share my findings and what I used to help other people to build their own robot.

Many info can be found in the official site (eg: here and here and here). This article contains my consdireations and suggestions.

I tried different slicers for my Anet A8, but my prefered one is Simplify3D. After some tuning this is my configuration file.

The pieces are very well designed and easy to print, so even a standard configuration of a printer is good enough.

All the parts can be downloaded from the gallery section of the project site. In particular you need to download and print:

A PC with Java installed (more on second part) or a Windows tablet is needed to communicate with the Arduino (which acts like a proxy between My Robot Lab and the peripherals). For developing purpouse a PC is ok, but for a “demo unit” a tablet is more convenient. I borrowed a Trekstor Wintron 10.1 from my office: not very fast but do the work fairly.

For the eyes, 2 little servos are needed (one for the horizontal movements and one for the vertical). Gael suggests using Tower Pro SG90, but I prefere the MG90S : it has the same torque and speed, but has a metal gear and should be shock proof. The price is a bit higher (5€ each vs. 4€) but nothing you can be worried about. 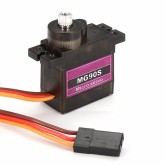 If you want to use the recognition features using OpenCV, you’ll obviously need a webcam. I’ve used the Hercules HD Twist camera: it’s cheap, has a good quality image, and it is official supported by InMoov. I’ve used this nice tutorial for disassemble the camera.

It draws a lot of juice, about 800mA, so be careful to use a decent battery (see below). 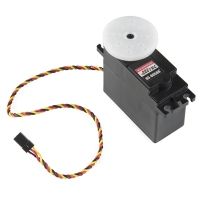 Gael uses Hobby King HK 15298B, it’s a bit expensive but works well, until you destroy them using high voltage batteries 😅. It has a 90 degree rotation and it is perfect for the jaw.

I’m insted using a MG996R: it is cheaper, but has a 180 degrees of rotation, so be careful when moving the jaw (you can break the mechanism if the servo rotates a lot).

You can alternatively use JX PDI-6221MG too.

Servos juice batteries. Lot of batteries. I tried many different configurations, but in the end, the best, suggested and safe approarch is to use a 6V SLA battery or a high output (amps) power supply.

An Arduino Mega (or compatible) is suggested. For the head and torso an Arduino Uno is ok too, but I used the Elegoo Mega 2560 (a cheaper Arduino Mega).

Before installing each servo, make sure it is in the correct “rest” position. For example, for the eyes servo you need to rotate the gear to  90 degrees, so when assemblying the eyes they will able to rotate left and right.

You can use this snippet in Arduino to rotate the gear:

You can (and will) change the mapping and rest position of each servo, but starting from a correct position will save a lot of time and require less fine tuning.

Once all parts are printed, you need to assemble everything. This video explain briefly the necessary steps:

Some pictures about my long jouney

My beloved Anet A8. It’s heavily customized. I should write an entire post about it.

I printed an additional head stand from thingiverse, for easily assemble the neck and other stuff.

I can’t resist to make a first video 😊

You can see the size of the model: almost 1:1

In this picture you can see the eyes mechanism assembled. At that time the eyeballs were moved by SG90 servos, replaced afterward by MG90s.

Eyes test. I wrote a little program to move the eyes using an Arduino joystick.

The old H-King servo for the jaw died suddently.

His memory is alive in our hearts 😢

Herclues Camera mounted on left eye. Had to completely disassemble it.

Video quality could be better, but I have only two arms (and a toilet roll 🧻).

Eyes are moved using the joystick: what they see is displayed on PC (yes, it’s a normal webcam connected to the PC (yes it’s a Mac, not a PC…))

This is a funny interlude, not relevant for this post. Part 3 of this article will talk about software.

The video is in italian. It recognizes various commands (looking in 4 directions). Querty is a bit touchy, wonder why…

This is the less detailed part. There is no footage on how my colleague disassambled the speakers.

Essentially you have to take apart all the plastic stuff from the the speakers.

Screw each speaker in the ear support. Soldering / cut some wire could be necessary.

As you can see from the video, the volume know is now screwed inside the head.

The audio jack will be inserted in the host device (tablet or PC).

For the up/down head movement another servo is necessary.

I had to print all the remaining neck parts and some of the torso.

Head stand is not needed anymore.

Wiring all the stuff

The best thing is to pass them through the neck, since it has enough room.

Then it’s time to join the wires to Arduino. I’m using a breadboard for testing.

Each servo has 3 wires (usally black, red, and white (or yellow):

In the picture above you can check that each red is connected to the + binary of the breadboard, the blacks to the – binary, and the commands directly to the the Arduino.

More specifically (from left to right on the breadboard):

Do not forget to connect the Arduino ground to the – binary!

In the second part we’ll see how to configure My Robot Lab.